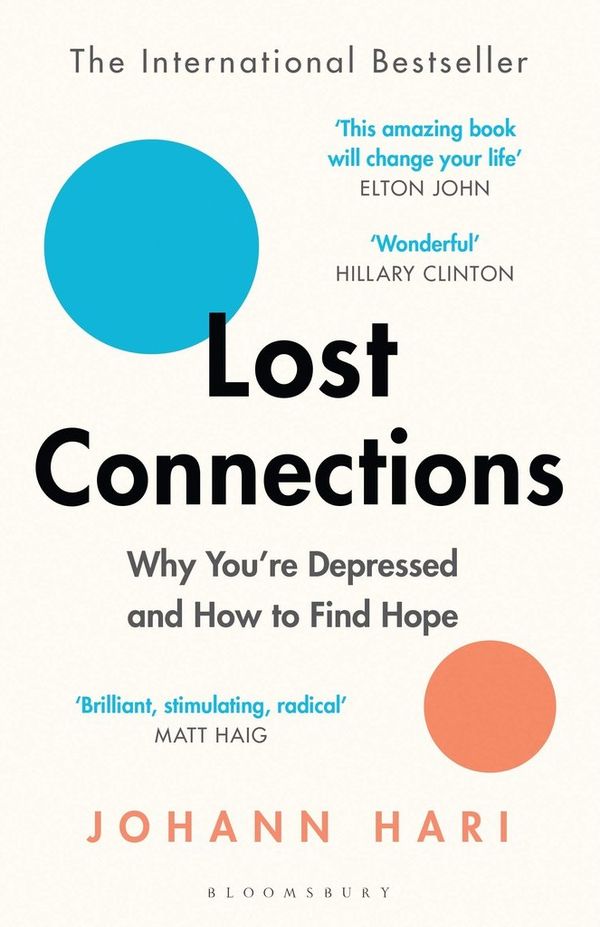 Why antidepressants can’t be our only solution to depression, how social isolation is causing it, and why we can be hopeful for the future.

Around 280 million people around the world suffer from depression. It’s a huge problem. I’ve seen it very often in my GP placements and seeing how much it affects people has made me want to understand it better. Johann Hari wrote Lost Connections with these exact intentions—to understand his mental health better and share his discoveries with the world. In this article, you'll learn:

Okay so I was pretty shocked when I read this. A study was done on people recovering from depression. It showed that only 25% of the recovery could be put down to the chemicals themselves, and their reaction on the brain. A further 25% came down to natural recovery and a whopping 50% of recovery was due to the placebo effect. The placebo effect relies on belief in the story that you’re going to get better, and that actually provides the same physical results as the chemical treatment. So basically, the belief in the story that you’re getting better has a bigger impact than the chemicals in the drug.

Another statistic that shocked me was that the proportion of people on antidepressants who continue to be depressed is found to be between 65 and 80 percent.

From this, we can safely say that biology isn’t the only thing causing depression. It isn’t just a chemical imbalance because if it was then the chemicals would have a bigger impact. We need other solutions, medication alone shouldn’t be the only solution that we provide. To find them, first we need to understand the problem better. That’s what Johann Hari aimed to do with this book. Through exploring the complex nature of depression, he discovered one very simple deficiency in our society—connection. Connection with others, with meaning and purpose, with past trauma, with status and respect, and many more. In this article, I’m going to focus on the connections with others, and some amazing stories that Hari told in this book.

Rather than thinking of the brain as an isolated island, we could think of it as having hundreds of bridges to the outside world. As you receive signals from the outside world, things are being carried on and off. Social media provides us with the ability to connect with literally billions of people. We feel constantly connected to everybody, but the relationships we have through these platforms are often meaningless. We’re posting to prove that we aren’t living boring lives, rather than to provide value to others. I loved this quote from the book:

“Loneliness isn't the physical absence of other people, he said—it's the sense that you're not sharing anything that matters with anyone else."

Hari delves into the evolutionary biology of humans to point out that we’re made to be in tribes. Those that did have a tendency to wander off and seclude themselves were killed, therefore wouldn’t survive long enough to pass on their genes. We aren’t designed like polar bears—they can survive on their own. We can’t. But that’s how we’re living now.

We’re now more socially isolated than ever. I found it so sad to read that when they asked American adults how many people they could genuinely confide in, the average answer was zero. I found living in London last year quite isolating at times. Being surrounded by people doesn’t stop you from being lonely, meaningful connections do. This book has an incredibly inspiring story about meaningful connection, a story of a community banding together to stop a lady from taking her own life.

Kotti is a neighbourhood in Berlin. It’s made up of elderly Muslims, teenage punks, single mothers and retired communists. A pretty diverse population, and as you can imagine, many didn’t see eye-to-eye. Until one member was in desperate need of help. Nuriye was an elderly lady living in Kotti, and she couldn’t keep up with the constantly rising rent. As a result, she put a note in her window saying that she intended to kill herself before her eviction. The community set aside their differences to help Nuriye and, in turn, discover that they had much more in common than they initially thought. The whole community protested together, and as a result, got a rent freeze.

We’re very individualistic in Western society. If I have a problem then I’ll solve it for myself. I’ll buy self-help books on Amazon and do some yoga or something. Hari suggests that instead of looking for a quick-fix for ourselves, the solution may be in focusing our efforts on the problems of others and being genuinely vulnerable about our own problems to allow our community to help us. One Doctor in London took this social approach into his practice.

The doctor partnered with local charities and volunteer groups to prescribe social connection. They have hundreds of programmes that create meaningful connections through helping the local community. Groups will rejuvenate local gardens, cook together, walk together, and so much more. I’m considering being a GP in the future, and I hope that I will be able to prescribe these interventions—it’s an integral missing part of healthcare at the moment. I really believe in the message of this book and think that these groups can be a huge benefit both individually and to our local communities.

The chemical imbalance theory tells you that your brain is not working properly, and the drugs will fix it. That’s wrong. It is constantly changing according to your environment. You see, depression creates changes in the brain, it isn’t a result of them. If you didn’t exercise for a year, your bones would become weak. However, if you then did weight training every day, your bones would adapt.

If your brain gets deprived of connection, the neurotransmitters and hormones will adapt to that. They’ll drop. The reason I’m so hopeful about this new theory, is that it takes the solution out of the hands of the pharmaceutical companies and puts it into yours. We can change our brain chemistry by adapting our lifestyles to form meaningful connections. Antidepressants can be a good way to kickstart this journey. To provide the boost to join local groups and form connections, but just as Nuriye couldn’t solve her problems alone—the antidepressants can’t either. We need a community of people to support us.

I’ve only touched on one disconnection in this article, there are 6 others in the book. I highly recommend reading it if you’ve enjoyed this, you can buy the book here.