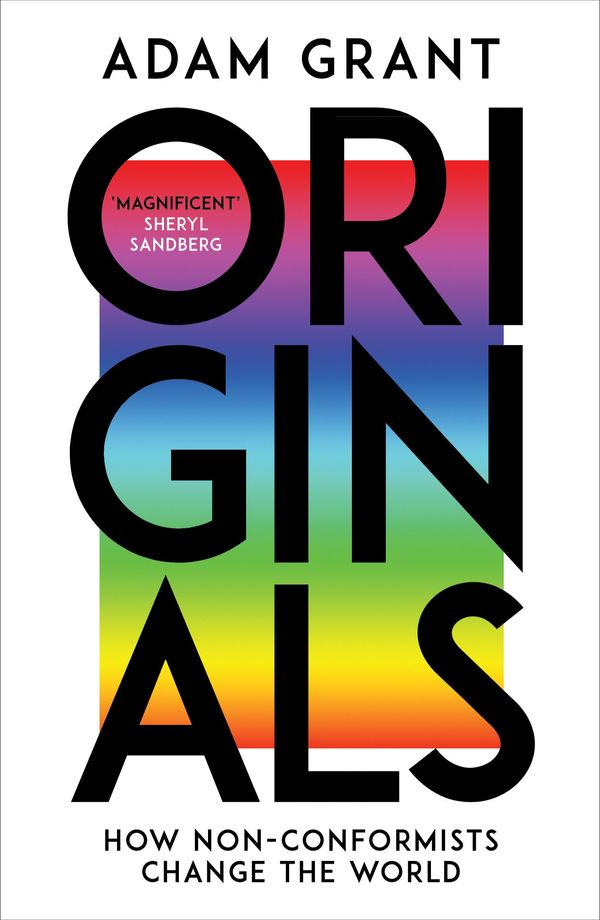 How non-conformists change the world. Let's get past some common misconceptions to the real reasons.

If you were going to predict how successful somebody would be in their job, what would you base it on? Before this book, I would have guessed how long they’d been in the company, or whether they were young and ambitious, or older and more experienced. It turns out there’s a much better predictor—and you won’t expect it!

A solid way to predict the success of a person is by looking at their internet browser; before you run to delete your search history, it’s nothing to do with that. Employees that use Firefox or Chrome remained in their jobs 15% longer than those that used Safari or Internet Explorer. From over 3 million data points they had higher sales and shorter call-times. They were 19% less likely to skive off work, and reached high customer satisfaction 30% quicker.

By looking at internet browsers, these researchers were identifying people that Adam Grant refers to as ‘Originals’. I loved this book, and want to share a couple of things that it taught me. Firstly, what an original is, then address some misconceptions I had of iconic non-conformists like Abraham Lincoln, Martin Luther King and Nike co-founder Phil Knight.

What is an Original?

Modern life is built around conformity—go to school, then University, then get a job and work your way up the ladder to the pinnacle of status and accomplishment. Originals stray away from this path into the unknown, but maybe not as far as you may think, we’ll get into that later.

When we look back at the internet browsers, Safari and Internet Explorer are the defaults on Mac and Windows. They’re conventional. Those using Firefox or Chrome had to take the initiative to download their preferred browser. But it didn’t just stop there. They took this approach into every other aspect of their work, like re-writing the typical sales script when it wasn’t converting. I learned here that you don’t have to quit your job and become an internet entrepreneur to be a non-conformist, they’re just the most famous ones. You can apply these principles in any work.

There are a few misconceptions of non-conformists, though. Here’s examples of some of the most renowned names in history, and how they were more like you than you think.

They don’t take reckless risks. Rather than taking uncontrollable risks, they create a balanced risk portfolio. For example; Steve Wozniak kept his job at Hewlett Packard while being the architect behind the original Apple products. The pioneer behind Nike also took the same approach, Phil Knight kept his day job while designing the first Nike shoes, and we all know how it went from there. This trend continues. A study found that entrepreneurs who quit their day jobs had a 67% higher chance of failure than those who stayed.

There was nothing reckless about this. Both Wozniak and Knight balanced their risk portfolios. Their day jobs provided them with the financial stability to take more radical risks in Nike and Apple. It took away the immediate pressure to get something on the market, giving them time to build on their ideas, instead of releasing half-baked products to pay the bills.

So they’re not reckless but they must be fearless, surely? I can’t think of anything more intimidating than having to do what Martin Luther King did. Speaking on that stage in front of the entire world. Knowing that the momentum of the American civil rights movement relied massively on what he said. Before making his iconic ‘I have a dream’ speech, Martin Luther King said “I became posessed by fear”. He overcame that fear and his thundering voice united the entire country around his vision of freedom.

It’s the same story for Google co-founder Larry Page. He said: “We almost didn’t start Google, we were too worried about dropping out of our Ph.D program”. In 1997, they tried to sell their distracting side-hustle for less than $2 million. Luckily, the buyer refused.

I feel like sometimes it’s easier to assume that these iconic people are just built differently. They don’t feel fear, they don’t have to do their laundry, they’re just not like me. In reality, they all faced the same fear that we do. The difference may be in weighing their options, mitigating risks and carefully planning a route forwards.

Surely non-conformists must not care about what other people think. That’s why they stray away from the curve. Actually, that’s would be wrong. Before we get into why, I want to talk about a company that’s helped me with making this video.

Abraham Lincoln is widely regarded as one of the best American presidents. He made radical decisions that shaped history. Surely he had to disregard the approval of others make decisions against the grain. Against the conventional thoughts of the time. When experts rated the Presidents on their desire to please others and avoid conflict, Lincoln scored the highest. He wanted to avoid conflict. He spent 4 hours a day speaking with citizens, gathering their perspectives. It took him 6 months to come to his final decision to issue the Emancipation Proclamation to free the slaves.

When analysing 15,000 entrepreneurs, people with little concern for pleasing others weren’t more likely to build businesses. Nor did they perform any better. Non-conformists do care what people think. They don’t disregard approval, but they don’t rely on approval from everybody before taking action.

They aren't fearless, reckless or ignorant, but Originals question convention. They ask why and optimise when the answer isn't sufficient.