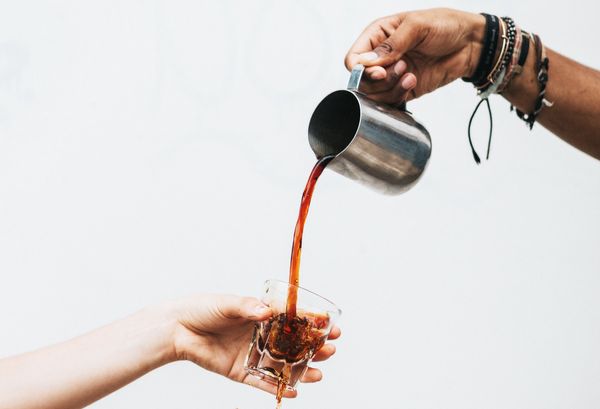 Coffee is great for your brain, unless...

Coffee acts as the fuel for most of my academic work; I can't write without a cup, nor can I study without one. Turns out, I'm not alone. In the UK we drink approximately 95 million cups of coffee per day. Given we're all so reliant on central nervous system stimulant—a mild cocaine, of sorts—I want to know how it works and how daily consumption of coffee is affecting my health.

Most of us consume coffee for the effects of caffeine. We didn't get enough sleep the night before so the solution is 'a large cappuccino please sir'. Caffeine makes us less sleepy. To understand how, we need to understand adenosine. Adenosine builds up in the brain as the day goes on, making us relax and feel tired. When we sleep, the adenosine is flushed from the brain—leaving us refreshed. When we're deprived of sleep, however, it remains. Caffeine blocks the effects of adenosine, increasing alertness. Just what we need for an intense study session.

'I'm addicted' is often thrown around in relation to coffee. I'm definitely a culprit of this. I always put this down to caffeine causing dopamine release, shifting the balance of our reward pathways. However, that's not the case. Here's why:

While caffeine produces a small rise in dopamine, it does not cause the large surge that unbalances the reward circuits in the brain and is necessary for an addiction. So even though the word “addiction” is often used casually, caffeine is not addictive (scientifically speaking).

Antioxidants are the other, neglected, component of coffee. We're constantly being assaulted, on a molecular level, by our environment. The perpetrators of this assault are free radicals. Tobacco smoke, UV light, pollution directly cause their release; while our immune response to viruses and bacteria spin off free radicals. This molecular mafia damage our cells and DNA. Antioxidants disarm them, neutralising their ability for harm. In Western diets, we get 79% of dietary antioxidants from beverages—mainly coffee and tea—while only 21% comes from food.

When I had my first coffee, I believe my exact words were: 'I'm buzzing my tits off'. Now, when I have the exact same amount there's no buzzing and the tits stay firmly on my body. Why? The body isn't dumb. It works out that we're trying to trick it into staying awake by blocking adenosine with caffeine. To combat this, the body increases the number of adenosine receptors on its cells. This means that to block all the receptors, achieving the same effect, you'll have to drink more coffee.

As we age, there's an inevitable decline in our cognitive abilities. It's sad, but it's coming for all of us. A study in 2019 found that habitual consumption of coffee caused a "measurable attenuation of neurocognitive decline associated with normal aging and neurodegenerative disorders". Now, that's a mouthful. What it means is that coffee can help fend off the brain decline that comes with age and brain disease. Several large studies showed that it can reduce risk of Parkinson's disease by 24–30%. Another series of studies reported a decreased risk of Alzheimer's disease in people who habitually drink coffee.

Caffeine has also been shown to increase long-term memory, however, they found no impact on short-term memory, information processing, planning, and attention. This means that while I have my morning coffee to help me concentrate, it doesn't actually increase my attention span. That's probably a placebo effect.

While my main focus is always on the brain, I stumbled across some statistics that are too interesting not to share.

An analysis of 1,109,272 participants found that 6 cups of coffee per day was associated with a 33% lower risk of type 2 diabetes, compared to no coffee consumption. Potential reasons for this could be the antioxidants reducing cell damage or coffee reducing the release of ghrelin, the hunger hormone. 500 people living with diabetes die prematurely per week in England and Wales, according to Diabetes UK. That's a potentially profound impact on public health.

Usually when we work out, we burn glycogen stores first, then fat. With caffeine on-board, this shifts. A study found that in lean people, caffeine increased fat burning by up to 29%, while this increase was only 10% in obese individuals.

Habitual coffee consumption has also been shown to decrease risk of cardiovascular disease (CVD), with a 2018 study finding that:

"habitual consumption of 3-5 cups of coffee per day is associated with a 15% reduction in the risk of CVD, and higher consumption has not been linked to elevated CVD risk."

Caffeine can interfere with our sleep cycle—through disrupting our normal adenosine accumulation—especially if consumed close to bedtime. Caffeine specifically reduces the time we spend in slow-wave sleep—the stage of deep, restful sleep that leaves us feeling refreshed. Sleep is essential for our immune system, muscle repair and creativity. Deprivation causes problems with learning, memory, problem-solving and emotional regulation. In his book 'Why We Sleep', Matt Walker states that when we sleep less than 6 hours per night:

"...time to physical exhaustion drops by 10 to 30 percent, and aerobic output is significantly reduced."

The gains we make from drinking coffee are quickly disposed of if we don't sleep well.

How Long Does Caffeine Last?

Half-life is the amount of time for your body to process half of the caffeine you consume. The half-life of caffeine is around 4-6 hours. A study found that when having their coffee 6 hours before bed, participants slept up to an hour less per night. This effect was worse when drinking closer to bedtime.

The Earlier the Better

Coffee has many positive effects, but if this is having a detrimental impact on sleep then it's not worth it. Caffeine sensitivity varies from person-to-person. It's a case of finding the amount and timing that works best for you. To capitalise on the positives, while minimising its effects on sleep, earlier drinking is better. Allowing time for the caffeine to be broken down before your head hits the pillow.

Coffee is great for your brain, unless... it affects your sleep.

Coffee reduces risk of type 2 diabetes, brain and heart disease; while increasing your long-term memory, capacity to burn fat and reaction time. However, none of these effects are worth it if it's affecting your sleep. Losing sleep has a profoundly negative impact on the body affecting the immune system, risk of brain disease and heart disease. All of those accrued benefits, lost. Providing time for coffee to be broken down allows us to simultaneously utilise the benefits of coffee and effective sleep. Before 2pm works for me, but try it out for yourself and let me know what works for you.